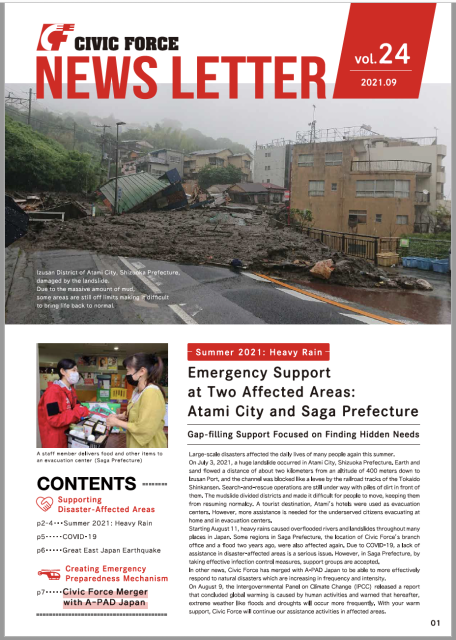 Large-scale disasters affected the daily lives of many people again this summer.

On July 3, 2021, a huge landslide occurred in Atami City, Shizuoka Prefecture. Earth and sand flowed a distance of about two kilometers from an altitude of 400 meters down to Izusan Port, and the channel was blocked like a levee by the railroad tracks of the Tokaido Shinkansen. Search-and-rescue operations are still under way with piles of dirt in front of them. The mudslide divided districts and made it difficult for people to move, keeping them from resuming normalcy. A tourist destination, Atami’s hotels were used as evacuation centers. However, more assistance is needed for the underserved citizens evacuating at home and in evacuation centers.

Starting August 11, heavy rains caused overflooded rivers and landslides throughout many places in Japan. Some regions in Saga Prefecture, the location of Civic Force’s branch office and a flood two years ago, were also affected again. Due to COVID-19, a lack of assistance in disaster-affected areas is a serious issue. However, in Saga Prefecture, by taking effective infection control measures, support groups are accepted.

In other news, Civic Force has merged with A-PAD Japan to be able to more effectively respond to natural disasters which are increasing in frequency and intensity.

On August 9, the Intergovernmental Panel on Climate Change (IPCC) released a report that concluded global warming is caused by human activities and warned that hereafter, extreme weather like floods and droughts will occur more frequently. With your warm support, Civic Force will continue our assistance activities in affected areas. 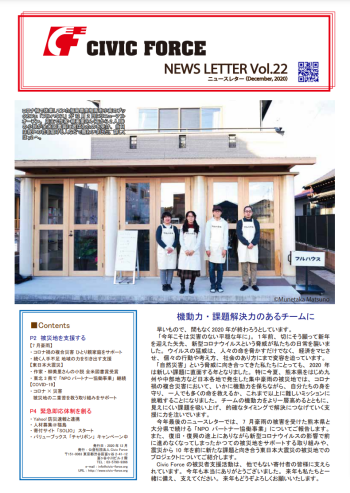